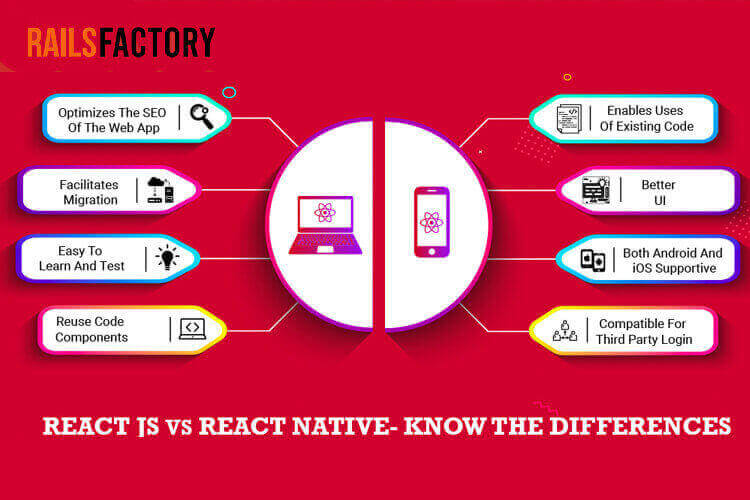 The mix-up of Java and JavaScript is no longer a secret in the developer world. Though entirely different, the languages often get caught in the midst of confusion, mostly by newbies because of their similar names. However, this is not the case with React Native and React JS. Name is just one of the components that is similar; however, to understand better one needs to look at the functionality of each distinctly and point out the differences as come upon.

Must know differences between React JS and React Native

Let us consider the few notable differences for a broader outlook among these two Web frameworks.

React Native is a mobile application framework where ReactJS is a Javascript library which one can use for building the website. Usually, React Native comes up with everything you need, so you might not need more. You can start coding the native app using some ES6, ES7 Syntax features and even a few polyfills. For running app, you need to have Xcode for Mac or Android Studio for Android installed on your computer. And, you can decide to run it on an emulator/simulator of the platform you want to use or use it directly in your device.

When starting a new React Native project, you get developer tools from React without the hassle of installing anything new. Hot Reloading is accessible and is quite good to use when you need to make small changes into the styles of your app. For bigger changes in the app, you can use Live Reload which reloads the entire app as you make a change in the code.

The best part of working with React Native is the ability to use developer tools you can use with ReactJS. Plus, Chrome Dev Tools works greatly for inspecting the network requests, stop the code on debugger statements, and display the console logs. You can use the Redux DevTools to inspect the state of your Redux store.

It’s time to say goodbye to CSS animations. With React-Native, you can learn a new way of animating various components of the app using Javascript. Use an animated API provided by React-Native for animating a component. React Native also provides LayoutAnimation which is simple to use for transitions and works for iOS as it doesn’t support Android at this point.

For interacting with user gestures, React Native provides a JS API called PanResponder. You need to apply PanResponder to a view (image or text) of your component in order to enable the touch handler on this view. Then, the PanResponder provides a list of functions that can be used to catch different touch events including onPanResponderRelease (touchend), onPanResponderGrant (touchstart), and onPanResponderMove (touchmove). Such functions gives way to the native event and the gesture state with data like all the locations. accumulate distance and touches, velocity and touch origin.

React Native does not use HTML to render app, rather it provides alternative components that work in a similar manner. Those React-Native features plot the actual native iOS and Android UI components that get rendered on the app. Most of the components provided can be translated to some similar things in HTML.

To style the React Native components, one need to build stylesheets in JS. It looks quite similar to CSS, but not usually the same. Then, you can understand React Native is not created from web elements, and can’t be styled in the same manner.

Using React Native, you can build a nicely responsive app. Though bit tricky to use at first, you can become good after having basic understanding.

Mostly, react-router is used for navigation between pages. Still, there are a lot more libraries which can be used for transition. The navigator component provides all the thing you need to navigate between scenes. Unless you want to build a large mobile app that requires a lot of transition between scenes, you can always count on Navigator.

For developing an application for both Android and iOS, you need to learn how Android Studio and Xcode works in order to make sure everything is set up properly before the first deployment of your app on Google Play or the App Store. For Android, you need to follow the React recommendation to sign the APK before uploading it to the Google Play. For iOS, it works the way you deploy a regular native app.

React Native is quite fast. You can create complex UI very quickly and it works pretty well for both Android and iOS.

If you opt for mobility, you can hire React Native developers for React Native app development to get better feasible solutions.

React Native and Its Benefits for Business

Enables uses of existing code: This is a big point of the business as you can improve an app functionality without revamping it. The components of the React Native can be put into the native app’s code.

Better UI: React Native is all about UI. As compared with other JS frameworks like Angular JS and MeteorJS, React Native focuses completely on UI. With higher responsive UI, the application will have faster loading time than any other typical app.

Both Android and iOS supportive: When Facebook developed the React Native, it was only meant for supporting the iOS platform. But, with its current support from the OS for Android, it could now reduce mobile user interfaces for both the platforms.

Compatible for third party login: With React Native, you could connect the third-party plugin using Native module, so that it is easier to link to the device’s functions like rotate, zoom, while utilizing lesser memory and allowing quick page loading.

React JS and Its Benefits for Business

One of the top features of ReactJS is the JavaScript library is responsible for building a hierarchy of UI components. It offers support for both front-end and server-side. Let us check out how ReactJS is beneficial for the business.

Facilitates Migration: ReactJS can be integrated to every section of the existing page, even the sections with limitations. This allows developers to migrate data as per their convenience. Moreover, it is important to note that the ReactJS needs a library to perform effectively.

Easy to learn and test: You need to learn from a broad list of concepts in other JS frameworks, but not in excess of ReactJS. You can take all the advantages of the advancements made in the Java language ecosystem.

Reuse code components: You can always reuse the code components in ReactJS, thus helping developers to develop an app in a shorter span of time and saving a lot of time in coding.

Comparing two mobile app frameworks is never a smart idea. For the sake of transparency, this comparison between the two web frameworks is meant to guide developers for developing their apps efficiently.

Maintained by Instagram, Facebook, and strong communities of individual developers and corporations, React is one of the most popular web frameworks nowadays. Netflix, Airbnb, HelloSign, Walmart, Imgur being few among a large number of companies using ReactJS for their website development. On the other hand, React Native app development is mostly similar to ReactJS services, with few differences. Now that you know what each of these frameworks are meant for, you can hire ReactJS developer for web app development.